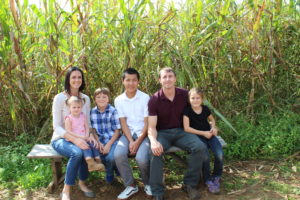 Katy Mills is a military mom of four and yoga teacher

Learn how this military mom (and yoga teacher) uses yoga to give back, know yourself and to be a better parent all while raising four kids ages 2 to 16

The first time Katy Mills tried yoga she was stationed in the army in Okinawa, Japan. At the time, she was pregnant with her second child so she accepted a friend’s invitation to join a prenatal class at the local military fitness center. “I didn’t like it at all!” she laughs. But, two years later, she decided to give yoga another try, enticed by the promise of free childcare and a military discount, and fell in love with hot vinyasa flow.

Since then, the army veteran-turned-army wife – whose husband is currently stationed in Virginia – has enthusiastically been sharing her passion for moving meditation in CrossFit gyms, studios and elementary schools across the country. She holds teaching certifications in hot vinyasa, hot stationary and yin yoga, but her specialty is vinyasa flow, which she currently teaches via a two-way camera on Ompractice.

Mills is the first to admit that practicing yoga on hectic days isn’t always easy, but thanks to Ompractice, squeezing in a quick yoga session – regardless of whether it’s six in the morning or six at night – has become entirely possible. We recently caught up with the mother-of-four to talk about how yoga has helped her become a better parent, finding work-life balance and why she thinks it’s so important for everyone to just breathe. 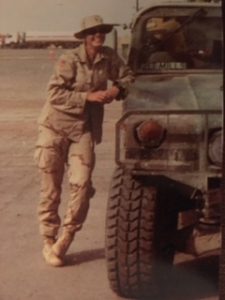 What first attracted you to yoga?
My very first yoga class was at a military fitness center in Okinawa, Japan. It was actually a prenatal class. I was pregnant with my second child and went to try it with a friend. I thought it really wasn’t for me. I didn’t like it at all! Two years later, I tried a hot vinyasa class and fell in love. I didn’t expect to like that one either. I just went because they had a military discount and childcare! It turned out to be life-changing. Based on that experience, my advice to anyone thinking of trying yoga is try more than one style and more than one teacher. You’ll find something that speaks to you.

How does your practice speak to the yin and yang of your career?
One of the things I have always enjoyed is giving back. I started volunteering in elementary school. Then the service aspect was a big draw for me to join the military. Being involved with teaching and practicing yoga appeals to me because it is a tangible way to make people feel better. I have had so many clients say, “Thanks, I feel better.” That gives me a great sense of accomplishment.

You have four young children ranging in ages from 2 to 16. How has yoga helped you become a better mom?
On a daily basis, I take about one thousand deep breaths and that’s about one thousand less times that I lose my cool. It sounds simple but I cultivate that response rather than reacting. I am also always telling my kids, “Take three deep breaths,” when they get mad. They act like they hate it but the other day my son Cody did it on his own and that was one of my proudest parenting moments.

How does yoga help you cope with your own emotions during difficult times?
My oldest was adopted from China at age 12. That was a pretty huge adjustment for all of us. I went back to practicing a few weeks after he came home. I just remember laying there on my mat feeling so many overwhelming emotions but, at the same time, like I was in a place where I could start to process it all and move forward.

Do any of your children ever practice yoga with you?
The other day I was taking a class on Ompractice and, since the toddler wouldn’t nap, she joined in. She also spent a lot of time right in front of the camera looking at herself on the screen. Most of the time, when I do yoga it is my “me time” for the day. But they don’t always get that. One day, I was doing a headstand wearing noise-canceling headphones and, at least three of them, came over and tried to ask me for stuff. I thought I looked pretty unavailable, but I guess that’s not how they saw it!

Serving in the military and teaching yoga seem like wildly different professions. Are there any similarities between the two?
I really wish I had done yoga when I was in the army. I think it is a huge benefit to those service members that do it now. Military life is pretty stressful. Anything you can do to increase your mental health increases your effectiveness. The physical benefits are also great for military folks who tend to put their bodies through a lot of wear and tear.

You have a loyal following on Ompractice. How would you describe your teaching style?
I focus on teaching all levels of classes, which gives people room to try something new or to back off a little if they need to. I like to invite people to challenge themselves physically, but also not lose focus of the mental work we come to do.

What attracted you to the concept of teaching live streaming classes, using a two-way camera to provide real-time adjustments and cues?
Life happens and sometimes you just can’t get to the studio for your practice. Whether you are taking your first yoga class or advancing your craft, Ompractice allows you the freedom and flexibility to ensure you can always make time for yoga. Case in point: I have four kids. That’s my favorite excuse for everything. It always applies. Seriously though, the opportunity to teach and practice without paying for childcare was very appealing. Also, we move a lot since my husband is still active duty. Every time we move, I have to start over to teach. This platform allows me to build a client base that can move with me.

What do you think is so unique about what Ompractice?
My favorite thing about Ompractice is that it is live. When I take a pre-recorded class, I always end up pausing to let the dogs out or to fix a snack for a kid or switch the laundry. But, when you are live, you don’t want to walk away. It helps keep you in the present moment. It also offers an energetic connection between participants that is comparable to what I have experienced in brick-and-mortar classes.

How do your online classes compare to the way you teach in a traditional studio?
In person, I like to walk around while I teach. I was worried that would be a hard habit to break, but it turned out to be an easy transition to sitting still. I also like to keep the sequence a little less intricate than I might offer in person since there are so many variables in each student’s environment.

How do you connect with students even if you’re thousands of miles apart?
That part has turned out a lot easier than I thought it would. A lot of my students I already know. But a few are new and I find it is actually pretty easy. There’s a few minutes of chit-chat at the beginning of class. Then the yoga does the rest.

What do you think makes Ompractice so unique and special?
I think there is a huge space for this model. I don’t think it will replace brick-and-mortar studios, but the opportunity to practice regularly with a teacher you trust no matter where you are is invaluable. It offers continuity, availability, and affordability to any student in any location.

How has yoga helped you find your own bliss on and off the mat?
Yoga has been a major factor in my evolution into being the person that I am today. I know a lot more about myself because of my practice, such as my strengths and weaknesses. And, through understanding, comes acceptance. Accepting where I am each day gives me a sense of peace and control when things seem crazy.

To learn more about Ompractice, sign up for our newsletter. We only email you when it’s important. But this way, we can help you #BeAtHomeInClass.